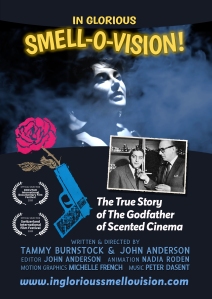 InGlorious Website
The story of unsung hero and Godfather of scented cinema, osmologist and Swiss inventor Hans Laube, whose Smell-O-Vision! technology was launched in 1960 with Scent of Mystery, a big budget Hollywood feature film shot in Spain, and starring “the most beautiful woman in the world”, Elizabeth Taylor.
Scent of Mystery was not only the FIRST, but also the LAST film to be presented in Smell-O-Vision! But why?

Australian filmmaker Tammy Burnstock makes it her mission to get to the bottom of what went wrong, along the way uncovering a very human story of scientific innovation, heartbreak and redemption.

In Glorious Smell-O-Vision! brings to light a previously-untold chapter in cinema history, proving along the way that movies that smell do have a future.

A Scented Roadshow Experience
In intimate vintage theatres around the globe, people gather to enjoy a participatory celebration of scented cinema. Each audience member will be taken on a journey to the past as they experience smells from the original stinker, Scent of Mystery (1960) plus two new smells: NYC in the 1950s and Running of the Bulls in Spain, custom-made at the Institute for Art and Olfaction.

Screenings include a scented clue (the rare and exotic Scent of Mystery perfume worn by Elizabeth Taylor), the faint smell of a yellow rose, the musky scent of The Running of the Bulls in Spain and even a scent joke, as Peter Lorre adds a pungent ‘kick’ to his coffee. 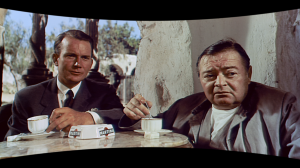 All of this as the audience explores the future of cinema that smells, while discovering the true story of Hans Laube, the Swiss scientist who pioneered scented cinema technology.

And there’s more! In the tradition of Cinerama Roadshow presentations from the 50s and 60s, the audience will be treated to  A Tale of Old Whiff (1960), a cartoon featuring bloodhound Whiff, put to work searching for a museum’s missing dinosaur bone. One small problem, Whiff has lost his sense of smell.

This original short, lost for over 50 years, has been found! New audiences will scratch and sniff sausage, bone, dog, soap, chocolate, rain, a single violet and a field of flowers, from a dog’s nose view!

If you are interested in arranging a screening, big or small, please get in touch with tammy@scentedstorytelling.com